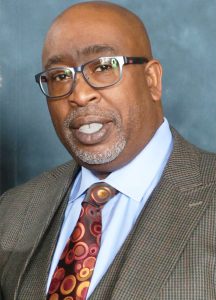 The Reverend Dr. Joseph A. Gilmore, Jr., is the Senior Pastor of the Mount Ephraim Baptist Church, Upper Marlboro, MD, a position he has proudly held since 2007. A third-generation preacher, he was licensed and ordained by his father, the late Rev. Joseph A. Gilmore, Sr.  Prior to being elected to the position of Senior Pastor, Dr. Gilmore served the Mount Ephraim congregation in leadership as treasurer and ordained deacon. He was appointed Assistant to the Pastor in 1996 and elected to the position of Co-Pastor in 1999, serving alongside his father. As the Chairman of the Board and CEO of the Mount Ephraim Community Development Corporation, he continues to guide the congregation’s efforts to impact the community and advance the Kingdom in meaningful ways.

Dr. Gilmore received the Doctor of Ministry Degree, with a concentration in Multicultural Leadership and Communication in the 21st Century, from the United Theological Seminary, Dayton, OH. He holds a Master of Ministry Degree from the Richmond Virginia Seminary. He also earned a Bachelor of Arts degree in banking and finance with a minor in management from Morehouse College, Atlanta, GA. He also completed graduate course work at Howard University School of Divinity, Washington, DC. He is a graduate of H.D. Woodson High School, Washington, DC.

Prior to entering ministry full-time, Dr. Gilmore was employed in the public and private sectors as a budget analyst, project director and comptroller.

Pastor Gilmore holds several affiliations, including as a member of the Progressive National Baptist Convention, the Kingdom Association of Covenant Pastors, the Morehouse College Alumni Association, the American Baptist Churches of the South, and the NAACP.

Born in Philadelphia, PA, to the late Rev. Joseph A. Gilmore, Sr., and Mrs. Ethel Gilmore, he is happily married to the former Deborah Laverne Stokes. They have one adult daughter.

Dr. Gilmore enjoys spending time with family and is an avid world traveler. His passport includes stamps from countries throughout Europe, including Germany, France, Switzerland, Liechtenstein, and Austria; the Middle East, including Israel, Jerusalem, Palestine; not to mention the Caribbean and West Indies, Mexico and the Hawaiian Islands.